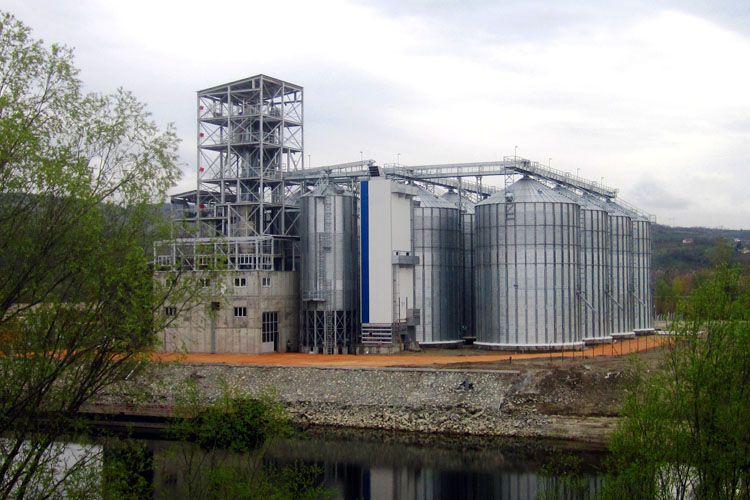 Bonfanti cereal dryers are Italian agricultural machines based on a total heat recovery system. If we talk about the technical characteristics and technological developments of Bonfanti cereal dryers, we can say that their main advantage is their perfect functionality in difficult working conditions, such as when drying the cereal in the presence of high humidity and in adverse weather conditions.

The Italian company, however, has developed its own drying concept, using new solutions and obtaining high-quality dried cereal as a result. This process is at the same time cost-efficient.

It should also be noted that everything is done in full compliance with environmental regulations regarding the release of pollutants into the atmosphere, through specific safety processes that prevent dust from escaping to the outside. This results in machines that are far more environmentally friendly than those of many companies in the sector.

Total heat recovery allows drying with considerable fuel savings, increasing the efficiency levels of each Bonfanti cereal dryer. Everyone knows that the cereal production of the dryers decreases abruptly during the cold season, as a lot of heat is being used to heat the cold ambient air.

Bonfanti cereal dryer fans supply the air already heated to the burner regardless of the outside temperature and also recover the air at a temperature of no less than 60 degrees from the cereal cooling zone. As a result, up to 30% more heat can be saved compared to dryers that do not have a recovery system, an important feature in terms of long-term use, since the practical results in terms of energy savings are substantial.

In particular, it is worth mentioning that each Bonfanti cereal dryer is equipped with an adjustable “anti-shock” cooling system which is essential for the success of a final product that is of the highest quality. As is well known, the quality of cereals can deteriorate as a result of thermal shock, due to a process of breaking and extreme drying of the cereal.

The final phase of the cooling of the hot cereals can also contribute to the reduction in the quality of the product; however, our “anti-shock” system provides for the gradual initial heating of the cereal with hot air and prepares it for cooling by gradually lowering the temperature, thus avoiding the problems mentioned above.

This state-of-the-art automated system thus makes it possible to obtain cereals with the highest organoleptic characteristics, respecting the very high-quality standards that our company set itself from day one.

In the middle part of Bonfanti cereal dryers there is a resting and tempering area. It is here that the moisture condensation is carried out on the external surface of the product, after which it is quite easy to remove the moisture remaining on the external surface in the final phase of drying, thus establishing those precious details that make a dried cereal, at the end of the production process, a quality cereal.

Fans are an integral part of Bonfanti cereal dryers. The fans are used to provide air movement.  Of course, you can buy a grain dryer where fans are installed over the entire structural height of the tower, but fans also have a downside.

First of all, they are a source of vibration and, by installing them on the structure, it should be taken into consideration that over time this will lead to the appearance of breakages and will cause a weakening of the fixing joints, thus increasing the need for maintenance.

Secondly, the fans on the cereal dryer structure rely on the extraction/suction of processed air, which is saturated with moisture and, as a result, reduces the life of the fans and requires further maintenance and cleaning of the fans, which becomes a costly process.

The experts at Bonfanti have been able to solve this problem perfectly by installing the fans on the platform on the base of the structure, significantly reducing the level of vibration and, consequently, all the maintenance related to them to be carried out over time, greatly reducing the operating costs for the end customer.

In addition, the fans on the ground are much easier to control than those positioned on the tower, even when cleaning.

Finally, we would like to remind you that the drying of the cereal is carried out by the machine fully automatically, using multiple thermal control systems as well as processing modules during the entire production process.

Bonfanti cereal dryers are protected against overloads and fires: if the temperature in the dryer has exceeded a permitted norm, the drying process is automatically interrupted and warning lights and alarms are activated in order to warn the personnel in charge and to put in place the right countermeasures before substantial damage is caused to the machine itself.